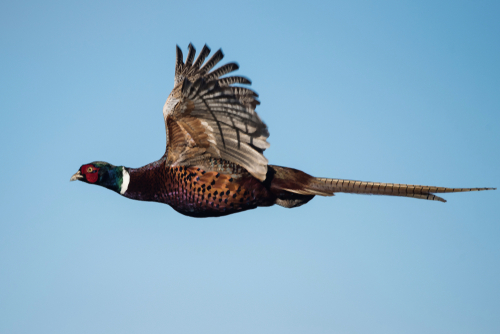 THE notorious Animal Liberation Front has claimed responsibility for releasing nearly 5,000 pheasants from a game farm.

The criminal act in the UK was slammed by the National Farmers’ Union and the Countryside Alliance.

Both groups said it was an act of vandalism which endangered both animal welfare and the environment.

The ALF said it released 5,000 breeding pheasants in night raids on the Colquite estate near Bodmin, Cornwall, and at a farm in Chilmark, Wiltshire, UK. The group claims it “liberated” around 4,800 of the birds.

In what it claimed as a change in tactics, the ALF said it will be targeting game farms and country sports.

The NFU said its actions resulted in “criminal damage and vandalism.”

Wiltshire Police is investigating the incident which came on the same day as a similar break-in at a game bird estate in Bodmin, Cornwall.

A spokesman for the NFU said: “People are quite entitled to their views about game shooting, but this absolutely does not excuse criminal damage and vandalism. This farm was going about its perfectly lawful business and the activities of these activists was completely unjustified. Fortunately these incidents are rare, but we would advise anyone with any information to contact the police so the perpetrators can be apprehended.”

A spokesperson for the Countryside Alliance added: “While animal rights extremists believe they are saving these animals, without adequate food and shelter they are in fact seriously compromising the pheasants’ welfare. In addition, by releasing the birds at such high density they are also increasing the possibility of localised environmental damage.”

ALF activists in Cornwall also claimed responsibility for the release of about 1,000 pheasants from a game farm and also posted online a video showing hundreds of birds at a farm in Wiltshire being released from their pens and running into nearby woods.

The ALF is an international group that admits members commit crimes in the name of animal rights.

An ALF spokesperson said: “We are committed to physically taking apart the structures of the shooting industry.”