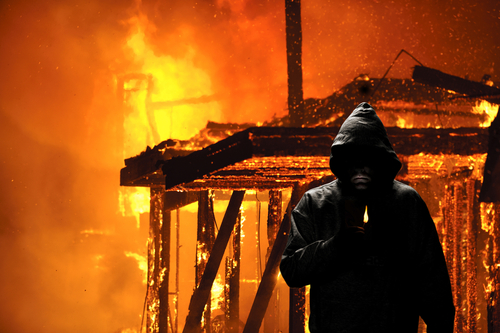 THE Animal Liberation Front is behind a string of criminal acts worldwide in 2019.

In Sweden, it vandalized a McDonald’s restaurant and bragged about it on its website called Bite Back. A post on the site, the mouthpiece of the militant group read: “A toilet at a McMurder in Sweden got sabotaged” with pictures of a vandalized bathroom at the restaurant.

The post added: “Vandalizing toilets at speciesist restaurants may be a minor form of direct action, but one should always take the opportunity to inflict economic damage to the oppressors – even if it’s just ***ing up a bathroom – every action counts!”

In Poland, activists torched a hunting tower and a post on the Bite Back site showed a picture of the burning structure with the words: “1st January, Poland. It is time to hunt the hunters.”

Images of a restaurant in Roubaix, France, which was damaged by fire appeared on the site.

The words “Stop Speciesism” had been daubed on the building.

The windows of a fur retailer in Lille, France, were smashed and the words “Their skin, not yours” daubed across shop fronts.

Images of the criminal act appeared on Bite Back.

A hunting website in France was also hacked and the ALF gloated about the security breach.

Images of balaclava-wearing activists appeared beneath the caption: “You have been hacked. Animal Liberation Front. It’s time to hunt the hunters.”

In Norway two hunting club buildings were destroyed by fire on the same night.

Both burned out structures had “ALF” and “Stop Speciesism” painted nearby and images of destruction appeared on Bite Back.

The ALF is a leaderless group founded in 1976 with numerous independent cells around the world. It carries out criminal acts to liberate animals and attack establishments it claims abuse animals.