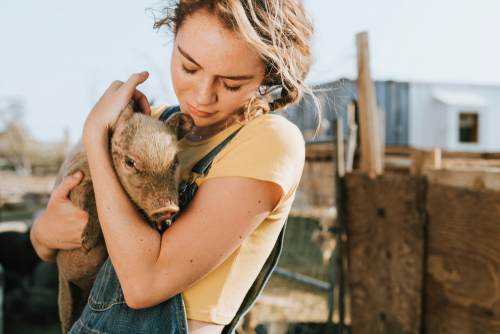 A compassionate farmer has told how she fears animal rights activists are doing more harm than good. Dairy farmer Noreen Wainwright said many “well-meaning” activists were ignorant about the countryside and how best to care for animals.

She spoke out after the Animal Liberation Front released 9,000 pheasants from a farm even though they would almost certainly perish in the wild.

Wainwright, whose farm is in Staffordshire in the UK, said: “I saw the news that animal rights protesters had broken in and “freed” 9,000 pheasant chicks. They thought they were doing a nice thing, and yet these pheasants will be dreadfully equipped to survive in the wild.

“The activists may have saved them from the shotgun but they have most likely condemned them to a short and miserable life. This is one of the great issues with animal rights protesters.

“All too often these are people who, despite having the best intentions, are so blind in their hatred of farming or countryside management that they end up harming the very creatures they are trying to help. Their mindless, trouble-making activism includes no space for listening to experts or considering the proper implications of their actions.”

Wainwrights said she feared the activists could not be swayed into listening to experts before their actions bring more suffering to animals.

She added: “These people would be better off listening to those who make a living from the land and from the countryside but this, sadly, is impossible because their views are now so totally extreme that there can be no reasoning with them. They are convinced that in ‘freeing’ birds or animals, they are doing the humane thing and that history will judge them to be right.

“They will not be swayed.”