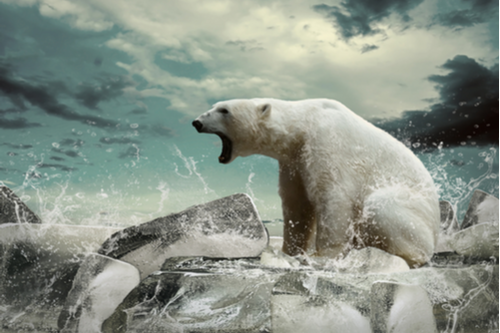 Animal rights activists have condemned an Arctic tour guard who shot dead a polar bear to protect a colleague. The guard fired after the bear surprised a group of four during an Arctic cruise expedition.

The incident happened on the Svalbard archipelago in Northern Norway—an area popular with polar bear tours.

Tourists had landed ashore from the MS Bremen ship when the attack happened, according to the Joint Rescue Coordination for Northern Norway.

Norwegian police said the guard first tried to scare the animal by shouting at it and firing a signal pistol in the air.

But the animal still attacked tourists getting off the ship and injured the guard as he tried to protect them forcing a fellow guard to open fire.

Animal activists have since criticized the Hapag Lloyd Cruises company after a photograph of the dead polar bear was posted online.

UK comedian Ricky Gervais wrote on Twitter: “Let’s get too close to a polar bear in its natural environment and then kill it if it gets too close.”

Julie Slater wrote: “Shouldn’t be invading polar bear territory. Shame on everyone (including the cruise company) who were involved with this unnecessary killing.”

Another post on Twitter read: “Here’s a thought. Why not look at the bears from afar and leave them alone.

Polar bear tours are popular with animal-loving tourists and shootings are rare.

Happy Lloyd Cruises said in a statement that it was “necessary for the polar bear to be shot dead.”

It said: “The incident occurred when the four-person polar bear guard team, who are always on board for these expedition cruises as required by law, prepared for a shore leave. One of the guards was unexpectedly attacked by a polar bear that had not been spotted and he was unable to react himself. As the attempts of the other guards to evict the animal, unfortunately, were not successful, there had to be intervention for reasons of self-defence and to protect the life of the attacked person.”

All cruise ships in the northern region have to carry polar bear guards on board.