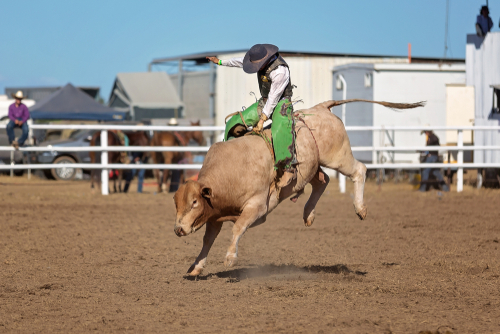 ANIMAL rights activists have been banned from filming a rodeo amid fears footage could be used out of context.

Bosses at the Waikateo Rodeo in New Zealand imposed the ban fearing one-sided editing by activists.

Rodeo president Wayne Raymond said: “It’s not that we don’t want people to take photos and enjoy themselves, it’s just that the activists are all one sided and they won’t put our side of the story out there.”

A local camera club have been given permission to document the event, he said.

Raymond dismissed claims that the filming restrictions were in place because the rodeo was trying to hide footage. He said the rodeo has offered spectators the opportunity to look behind the scenes at the animals as cowboys and cowgirls prepare for their event.

He added: “We’re pretty well governed and we’re really scrutinized and watched thoroughly. I’m pretty comfortable with what my team has put in place and the animal welfare code that we follow.”

Direct Animal Action said the rodeo organizers were contradicting themselves with the ban on filming.

Spokesman Apollo Taito said: “The assumption is that protesters or animal activists are editing or amending the footage in a non-favorable way. We don’t need to do that and if we want to use it as evidence.”

He said they planned a protest at the rodeo which takes place every February.

Activists close rodeo – but it will be back

0 comments on “Activists Banned From Filming at Rodeo”