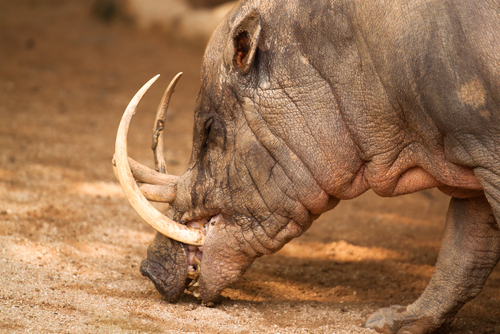 ACTIVISTS have been accused of endangering the welfare of British pigs by hindering a cull of wild boar. Animal rights campaigners have been destroying hides and shooting platforms used by marksmen in the Forest of Dean in South West England and then blaming “pixies” for the vandalism.

The UK’s Forestry Commission hired two extra marksmen to help cull over 1000 wild boar, amid claims that the boar population in the Forest of Dean has spiraled dangerously out of control.

Local pig farmers fear the boar could spread African Swine Fever and appear to have prompted the Forestry Commission into further action. It says it needs to bring numbers down from more than 1600 to near 400 if the population is to remain sustainable.

But the Commission’s efforts to manage the wild boar population have been repeatedly disrupted by local animal activists.

A group calling themselves the Forest of Dean Wild Boar Cull Saboteurs regularly post images on their Facebook page showing damaged locks and gates, and vandalized shooting posts, which are used by marksmen as hides during the cull, and which the animal activists call “killing chairs.”

When last year’s cull began, Forest of Dean Wild Boar Cull Saboteurs posted on its Facebook group: “We know we can’t stop it completely… but despite limited manpower, year on year we stop the Forestry Commission hitting its cull target. This year will be no different. Well done pixie friends.”

In response to the activist’s actions, Chief Inspector Andy Hodgetts of Gloucestershire Police warned: “There are certain Facebook accounts suggesting the Pixies have done it, but pixies don’t go around damaging signage and locks. It is unacceptable because, apart from being inconsiderate, it is wasting public money.”

Official figures show that in the last ten annual culls, 2,500 animals have been killed. Despite this, the population of boar has continued to rise in the Forest of Dean.

Latest official figures suggest the population is more than four times the recommended level of 400 and experts say they will continue to breed because there is enough food in the Forest of Dean to sustain 10,000 animals.

Local residents have demanded the culls be stepped up due to the damage the boar cause to homes and gardens, and to local amenities like sports fields and graveyards. The animals regularly leave lawns and plants ruined.