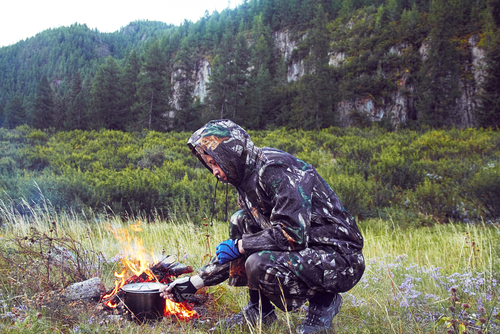 BEAR Grylls is facing a fine after he gutted and cooked a frog while filming in a protected national park. The TV presenter was filming an episode of his survival series Running Wild with US ballroom dancer Derek Hough, in Bulgaria’s Rila Mountains in 2017.

But animal rights campaigners complained to officials when they watched the episode on TV.

One of the challenges in the show included gutting and cooking a frog. They also swam in the Karakashevo Lake and lit a fire during their adventure.

The environment ministry said the pair had violated a number of the nature reserve’s environmental regulations by doing these activities and could fine Grylls and Hough up to $2,834.

A spokesperson for the ministry said: “It is evident from the film material that during the shooting there were breaches to the regulations and rules of conduct in protected areas:

“Entering and swimming in the water basin of the Karakashevo Lake, lighting a fire and catching and killing an animal.”

Officials added the production companies, Bear Grylls Ventures and Electus, could also be fined between $567 and $5,670 .

The park is home to many rare and endangered animal and plant species.

Grylls’ shows have sparked outrage from animal rights campaigners in the past. The former SAS serviceman was accompanied on a trip to Alaska by previous US President Barack Obama in 2015. They ate a salmon which had been gnawed by a bear during the program.

Claire Bass, director of Humane Society International/UK, said there should be higher ethical standards in broadcasting, so animals are not killed for entertainment purposes.

She said: “Yet again Bear Grylls’ animal killing activities are quite rightly coming under fire. It’s time for TV to dump this tired routine of men charging around the wilderness dominating wildlife and killing for ratings. It shows a callous disregard for the natural world and treats animals like mere props.”