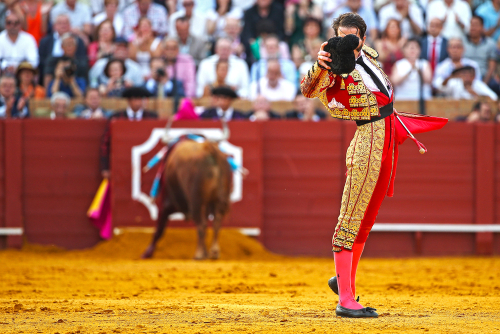 VILE animal rights activists have a mocked a bullfighter who was badly gored.

They took to social media when Enrique Ponce, 47, received horrific injuries at the Fallas Festival in Valencia, Spain.

One said: “I love happy endings.”

Another wrote: “How beautiful it is to see the bull triumph when it is used for such a stupid spectacle.”

The veteran bullfighter suffered a five-inch gore injury to his buttock and torn knee ligaments.

Crowds gasped as he hobbled for a couple of feet before aides rushed to lift him from the charging animal.

He was carried to hospital for an emergency operation after the drama.

The bullfighter, who is married to model Paloma Cuevas, is expected to have to undergo a second operation on his knee, which he had already injured last year.

Heartless extremists began mocking him after TV footage showed him lying stunned on the ground for a few seconds before getting up in pain and hobbling for a couple of feet as aides rushed to lift him and carry him away in their arms.

Father-of-two Ponce, one of Spain’s leading bullfighters, was badly gored in the same Fallas festival in 2014.

Las Fallas is Valencia’s biggest festival. It takes place every march in commemoration of Saint Joseph.