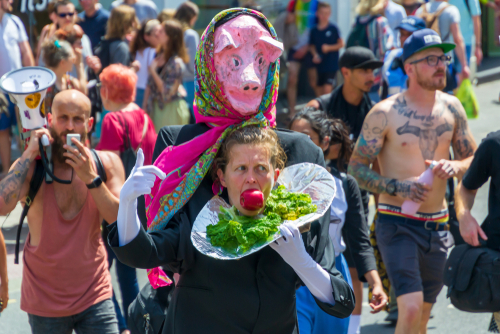 ACTIVISTS caused outrage by staging macabre animal funerals in the streets of Los Angeles. Onlookers were stunned by the spectacle of dead cats, pigs and birds being carried aloft through busy streets.

The “funerals” were organized by the extremist activist group “Our Planet. Theirs Too,” which staged the grim spectacle on the annual National Animals Rights Day.

City residents were angry about children being exposed to upsetting images of dead animals and about the health hazard posed by animal carcasses.

One described the protesters as “a gathering of loonies.”

A message on the Our Planet. Theirs Too website said:  “The National Animal Rights Day was created to give a voice to these billions and billions of anonymous nameless beings. On this day, we stop everything else, and remember them.”