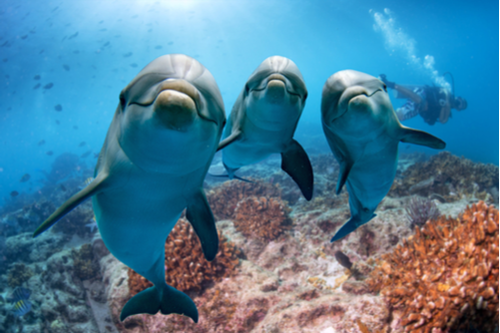 A group of extremist animal liberation activists brought a dolphin show to halt when they stormed an aquarium and jumped in the water.

Members of the Vegan Strike Group disrupted the daily show at Loro Parque, Tenerife and had to be ejected by security after causing distress to the dolphins. Spectators at the show jeered the activists as they were hauled from the water and thrown out.

The international organization claims to fight animal enslavement and pictures showed the activists swimming in the pool, waving around posters and calling for the closure of the animal park.

Workers at the side of the arena could be seen calming down dolphins that were in the water ready for their show. Security officers could be seen jumping into the pool and escorting the campaigners from the premises.

Last month, travel operator Thomas Cook announced it would stop selling trips to animal parks that kept killer whales. As such, it planned to cut ties with Loro Parque from next summer after “customer feedback.”

“Loro Parque, the infamous dolphin park on Tenerife was our battle scene today. “This park was already on our wish list for a long time. Even though we, as animal lovers, have to leave the sea creatures in a chlorine bath, we are very satisfied with this successful action.”

No arrests were made.