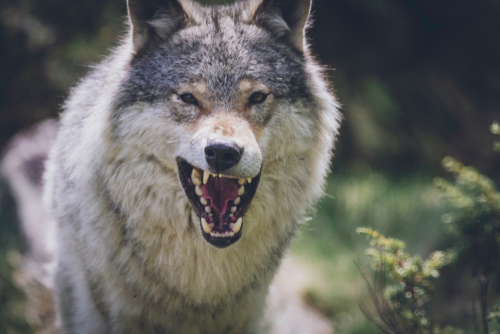 ANIMAL right protestors have objected to a new law that would allow the hunting of wolves that target livestock.

Grey wolves in America, which have been a protected species, are now set to lose their protected status because they are no longer endangered. Farmers and ranchers say they have recovered in such large number they have become a menace and now need to be controlled.

But activists have pledged to try and block the law claiming the animals should be left alone.

They say the wolves only occupy a fraction of their historical range, which once stretched across most of North America.

The U.S. Fish and Wildlife Service wants to revoke the wolves’ endangered and threatened species status and put them under authority of state wildlife agencies across 48 states.

Acting US Secretary for the Interior David Bernhardt said: “The facts are clear and indisputable. The grey wolf no longer meets the definition of a threatened or endangered species.”

Government officials said their goal was to protect wolves from extinction, not return them to everywhere they were once found.

Gavin Shire from the Fish and Wildlife Service: “The Endangered Species Act is not a means to keep species from being hunted in perpetuity once they’ve met the threshold of recovery.”

The predators are now preying on cows and sheep and have been blamed for declining numbers of elk, moose and other big game in some areas.

Trapping, poisoning and hunting campaigns early last century exterminated wolves across most US states by the 1930s. A final decision on lifting protections will follow a public consultation period.