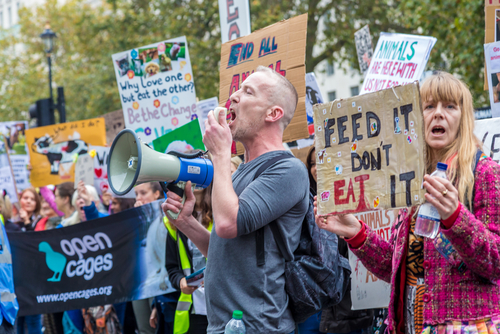 AN animal rights activists and suspected member of a banned neo-Nazi organization has told a court of his “admiration” for Adolf Hitler. Mark Jones, 24, denies being a member of National Action in the UK, which was made an illegal organisation in December 2016 following the murder of MP Jo Cox.

Giving evidence, he told jurors he was a national socialist, a vegan and animal rights activists but not a terrorist. He claimed Jews in the UK should leave the country and move to Israel.

Under cross examination Jones also argued fewer Jews were killed in the Holocaust than the six million figure accepted by historians. He also said he had subscribed to Hitler’s national socialist ideology since he was 17.

Jones denied a charge of belonging to National Action along with Garry Jack, 23, Alice Cutter, 22, and Connor Scothern, 18, at Birmingham Crown Court.

Answering questions from Barnaby Jameson QC, prosecuting, Jones said: “National Socialism – The Final Solution refers to a proposition put forward by in Nazi Germany of the final eradication of the Jews. I accept the Holocaust did happen. I am dubious about the logistics and the actual figures.

“It was less than six million. I express admiration for Adolf Hitler.”

“I am an animal rights activist.”

“I am not particularly concerned about homosexuals.”

Cutter and Jones, of Halifax, West Yorkshire, Scothern, of Nottingham, and Jack, of Shard End, Birmingham all deny belonging to National Action. The trial continues.