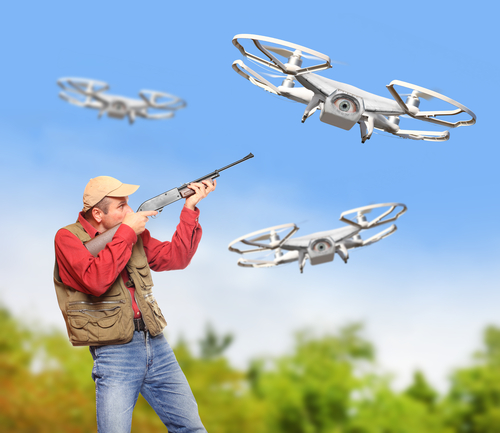 A drone being used to film a fox hunt was shot down by a pro-hunt supporter armed with a shotgun. A masked gunman fired at least three times at the £750 drone being operated by a hunt saboteur on the Isle of Sheppey in the UK.

Drone pilot Harry Blackhurst, 31, said he was filming what he claimed was an illegal hunt by the Ashford Valley Tickham Hunt. As the Kent Hunt Saboteurs captured footage from an estimated height of 50 meters, a lone gunman began shooting at their drone with a shotgun firing cartridges of shot. Despite missing twice, he eventually hit his target and smashed the lens, causing at least £500 worth of damage.

Blackhurst, a recruitment consultant, said: “We couldn’t believe it. There’s never been an incident like this with a drone being shot down. I think it’s worth mentioning the seriousness of the offence they have committed. It’s caused at least £500 worth of damage. But luckily I was able to get the footage and the drone back.”

In the UK fox hunting has been illegal since 2004 and many hunts now follow a scented trail instead—a legal activity.

But hunt saboteurs claim many organized hunts still chase foxes and use trail hunting as cover.

They have mounted a series of protests in the English countryside but riders and pro-hunt groups have been fighting back and defending their legal right to trail hunt.

Blackhurst said he reported the shooting incident and a separate assault to Kent Police who said both matters are currently under investigation after receiving two reports on the same day.

A spokesperson from Kent Police said: “Police were contacted shortly before 2pm on Saturday, 23 February 2019 following a report that a drone had been damaged on the Isle of Sheppey.

“At around 4pm on the same day Kent Police received a further report that a man had been assaulted. It is said the victim was pushed in the incident. Both matters are under investigation and enquiries are ongoing.”

“The hunt does not condone illegal behavior even in the face of extreme provocation by animal rights extremists. Hunt officials and our professional staff work hard to ensure good relationships with members of the public as well as landowners and other authorities. We will of course assist the police should there be an investigation following any allegations about our hunting activities.”

0 comments on “Anti-Fox Hunt Drone Blasted Out of Sky”