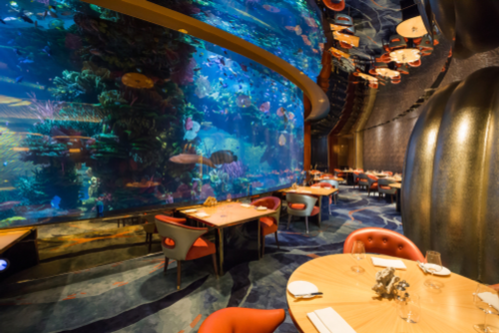 VEGANS stormed a Japanese fish restaurant that offers diners the chance to fish for their own supper.

The eatery, called Zauo, which opened in Chelsea, New York City, was mobbed by the activists on its opening night.

They gathered outside with placards but then stunned diners by storming inside through its doors.

They chanted: “It’s not entertainment its violence” as they paraded around the two-story restaurant.

One protester got on a megaphone and said: “I will never eat a fish or a dog or a cat or any living being… they are living sentient beings, they have feelings. Why are we exploiting them and commodifying them?”

Zauo restaurant reported the incident to the police but the protestors fled before officers arrived.

The 134-seater restaurant has three indoor tanks containing several different types of fish. Diners pay depending on the fish they catch, and the fish can be cooked in four different ways.