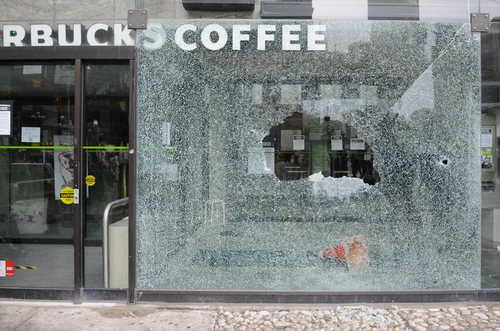 VEGAN activists stormed a branch of Starbucks for using dairy in their products. Police were called when the protestors chanted at customers in the coffee shop in Brighton, UK.

The campaigners from the Brighton branch of the notorious group Direct Action Everywhere (DxE) disrupted service in the city cafe while holding up images of cows being impregnated and shouting about alleged abuse in the dairy industry.

The activists were chanting “Not your mum! Not your milk!” as they described how cows are treated on farms, while promoting what they call “Februdairy.”

One man said on Twitter: “Just popped into Starbucks for a coffee and get accosted by vegan protestors shouting at the staff! You don’t see me storming a vegan restaurant calling them all jihadis for beheading carrots! Thanks for the free coffee.”

The same group has targeted other businesses, including a steak restaurant in which they played the sounds of animals being slaughtered to shocked diners in early December.

A spokeswoman for Sussex Police said: “At 1.10pm on Sunday (24 February) police were called to the Starbucks in Jubilee Street in Brighton, where around 12 people were taking part in a vegan protest. The group left at around 2pm. There were no arrests.”

Direct Action Everywhere (DxE) is an animal rights protest group that was originally set up in San Francisco in 2013. Its mission is to achieve ‘total animal liberation’ and the creation of a law requiring “species equality.”

By December 2014 the organization had spread across the globe, with groups established in 90 cities in 20 countries, and in the present day it has organized protests in 217 cities in 43 countries.

DxE pledge to take non-violent direct action but its disruptive demonstrations have been branded bullying. Members in the US have previously been charged with burglary and theft after raiding farms and stealing livestock.