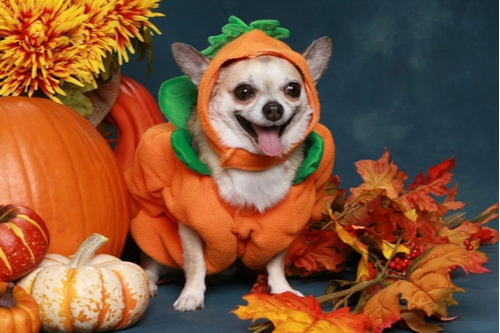 A dog owner was slammed on live TV for dressing her dog as a pumpkin for Halloween.

Kerry Whelpdale appeared with her dog Lulu in a pumpkin costume on the UK morning show Good Morning Britain. But she triggered a string of hate calls.

Viewers rang in and branded her “cruel” and others said costumes are “degrading for animals.”

But Kerry hit back claiming Lulu enjoys being dressed up because it makes her feel like “one of the family.”

She said: “If she was uncomfortable I would take the outfit off, but honestly she is so happy, she feels like she’s one of us.”

“I have a winter coat on so this is like her winter coat. It’s not being cruel to them, I’m not in any way, shape or form hurting her.”

Some viewers sided with Kerry.

One tweeted: “Of course it’s not cruel. What is the world coming to as long as the dog is not being abused or made to wear something dangerous what is the problem?”

The chat show was hosting a debate whether dressing pets up can cause them distress.