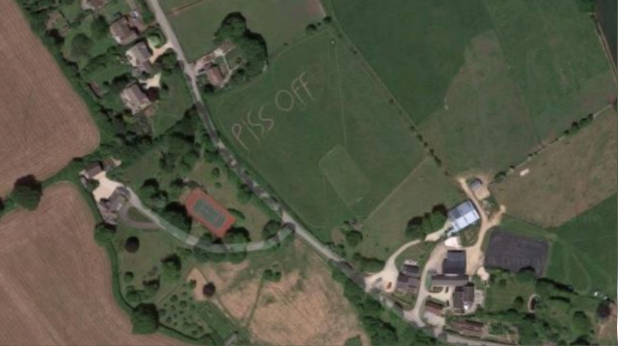 A farmer has told activists exactly what he thinks of them – with a giant two-world insult only visible from the sky!

He marked the words “P*ss Off” in a field near the village of Nettleton, ten miles outside the city of Bristol in the UK.

There has been speculation the message may be also directed at plane passengers, local balloonists, aliens, or even God. No one is really sure.

Other theories are that it is directed at Google Earth’s satellite—which snapped the picture which appears on Google Maps.

But with numerous cases of activists trespassing on farms to stage protests in the area they have been identified as the prime targets.

Back in January, Dairy farmer Paul Tomkins revealed the hate messages he received from activists.

He said: “I receive messages online, calling me a rapist or murderer or torturer.”