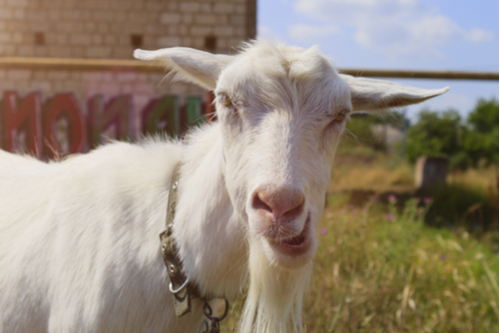 A goat called Fred smashed open a livestock gate allowing animals to escape before they could be taken for slaughter. Fred escaped from the same enclosure a year ago and it is thought he head-butted the gate open to save other animals.

Dozens of goats and sheep bolted for freedom at the Hackettstown Livestock Auction House in New Jersey, after Fred was spotted.

About 60 of the livestock were rounded up but up to 20 more are still believed to be on the loose.

The police received reports that Fred was in the area a couple of hours before the escape.

A day after the accident he appeared at the facility again and head-butted the gate apparently in a second effort to free more animals.

Auction house manager Bouwe Postma said: “I think he’s the culprit. He must have banged that fence and let animals out last night. I’m almost positive. He must have put a lot of force into that.”

0 comments on “Fred the Goat is Animal Rights Activist”