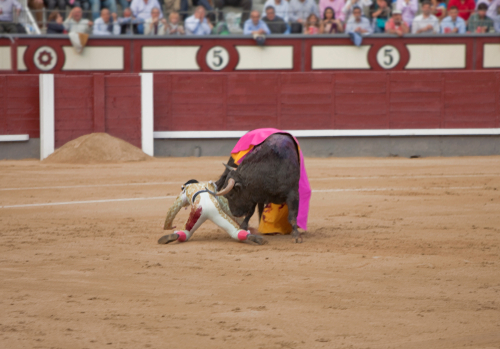 A female bullfighter who was badly gored has been targeted by trolls on social media.

Another wrote: “Mess with the bull you get the horns!!”

Tenorio received emergency medical attention in the bull ring in Puebla, Mexico, before being taken to hospital for surgery.

Footage of the dramatic moment she was knocked to the ground shows the half-ton bull, called Querido Viejo, which in English means My Dear Old Friend, charging her before onlookers rush to save her. Tenorio was facing down the bull on her knees when it trampled over her.

Graphic photos show her face covered in blood as she is carried out of the ring.

Despite the cruel messages from activists she received many more positive messages of support from fans.

After the operation, she wrote to her fans on social media: “I want to thank you all for your messages of support. My injuries are very serious and I have not been able to sleep all night, sat up in bed because there was no other option. The doctors have said my upper jaw is broken and my cheeks are fractured from my eye socket.”