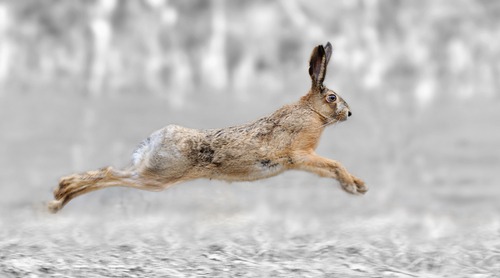 TOP officials have hit out at “exaggerated” claims by activists that hares are being slaughtered in Scotland.

David Johnstone, chairman of Scottish Land & Estates which represents land owners and rural business spoke out after activists filmed hares being culled in Scotland and claimed wholesale slaughter was happening.

The League Against Cruel Sports released a video appearing to show the animals being shot before being piled onto trucks.

In the video footage, passed to the BBC, three short sequences show the killing of about 20 animals.

But experts said the animals have to be culled in the Highlands because left uncontrolled they quickly multiply in vast numbers and put pressure on often protected habitats through their non-stop grazing.

They spread the sheep tick, which affects red grouse and can also cause the failure of tree planting.

Mr Johnstone said: “The truth of the matter and it may be unpalatable for some is that culling is not only sanctioned by government and its agencies, it is demanded by law in pursuit of maintaining fragile landscapes.

“Mountain hares are not being wiped out as some would have it. Hare populations move in cycles and they have always been managed by culling when numbers are high. When the population is at a low point, no culling is carried out.

“Estate businesses and gamekeepers are concerned about the incorrect impressions given in the animal rights film about mountain hare management. There is no ‘mass culling’ but sustainable management of a population in the same way deer are managed with no risk to the conservation status.”

The Scottish Gamekeepers Association and the Scottish Moorland Group also said culling was “not only legal but necessary.”

Tim Baynes, director of the Scottish Moorland Group, said: “Mountain hare management is not only legal but necessary and is carried out within a regulatory framework of closed seasons and licenses administered by Scottish Natural Heritage.

“There is no threat to mountain hare populations, as some activists pretend.

“Culls on open moorland typically reduce the population by 5-14 per cent.”

A Scottish Gamekeepers Association spokesman added: “Thousands of deer are killed annually, under government instruction and a potential £40,000 fine for noncompliance, to protect designated habitats. Killing thousands of deer then leaving thousands of hares to feed on that same habitat defies any sense or logic. We are not far from the stage now where people will not want to manage deer and hare populations because they cannot operate without being covertly filmed.”

“It is not only legal but necessary.”