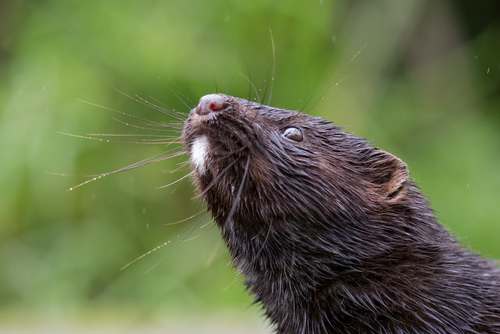 ANIMAL rights group PETA has blasted plans to slaughter wild mink—even though the animal is decimating other wildlife.

American mink introduced into the UK for fur farming have exploded in numbers and huge populations now live in the wild after escaping farms and breeding.

The British Association for Shooting and Conservation says the mink—introduced in the 1920s for fur farming—has destroyed populations of lapwing birds and water voles.

In Scotland the problem is so dire the Scottish Invasive Species Initiative wants to cull the creatures in Aberdeenshire, Moray, and the Highlands.

But PETA wants the cull stopped.

Spokeswoman Elisa Allen said: “Humans introduced mink to the region, so the least we can do is find a humane solution.”

But the Scottish Invasive Species Initiative said the cull was “crucial” to deal with the “big threat” to other wildlife.

Meurig Rees from The British Association for Shooting and Conservation (BASC) said the situation is critical.

Mr. Rees said: “There has been a tremendous hit on the water vole population.

“Records show there were nine million water voles in the UK—that is now down to a million. Mainly because of the mink—it’s a killing, eating machine which doesn’t belong in the UK. It’s a non-native invasive species from America.”

According to BASC, the extermination of the mink has the support of many animal welfare bodies – apart from PETA.  Fur farming was banned in the UK in 2000 but the mink population has increased dramatically since.

It is against the law to release non-native animals such as grey squirrel or mink under the Wildlife and Countryside Act.

Landowner Charles Grisedale, who runs a lapwing reserve near Pennant in Ceredigion, Wales, said he is considering placing a mink traps on his lakes to protect the ground-nesting bird, which has also seen a 90 percent decline in numbers.

He said: “It’s a constant fight to save the lapwing, we will lose them in Wales and this is a Welsh bird which has to battle many factors to stay alive including the non-native mink.”

“It’s a natural born killer, if it’s gets in with your chickens, they’ll all be dead. If you’re walking a little Chihuahua or other small dog along a river bank it’ll go for that and try and kill it.”

“It’s a mass killer with very few predators in the UK. They now rule our river beds, with a reign of terror over the other animals in the water and the surrounding land.”