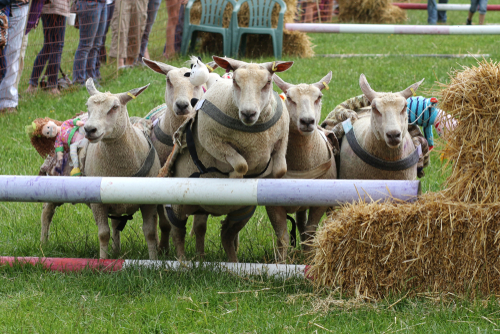 ACTIVISTS failed to stop a sheep race dubbed the Lamb National. More than 50,000 animal rights activists signed a petition to ban the race in which sheep hurdle fences like horses. Instead it attracted a huge crowd of cheering fans.

Some 51,746 online supporters of the petition from around the world were no match for the thousands who turned up for the race in Andoversford in Gloucestershire, UK.

The chairman of the event’s race committee, Peter McNeile, said: “We couldn’t see a reason for it not to go ahead. Sheep racing has been staged at numerous public events and it was done by a shepherd who knew his sheep. They were in excellent health. It was a professionally staged show and these events are very enjoyable.”

The Lamb National was held a day after the equine version at Aintree. Sheep wore colored jackets and jumped several hurdles, to cheers from the crowd.

Animal rights group Lambentations, which organized the petition, claims the race is cruel and says it has forced the cancellation of seven similar events including a pig race.

Its petition page encouraged people to add their signature by saying: “Sheep are quiet, timid and gentle creatures and making them run in a crowded and noisy environment for our entertainment is outdated and causes stress in the sheep. These cruel events must end.”

0 comments on “Lamb National is a Winner”