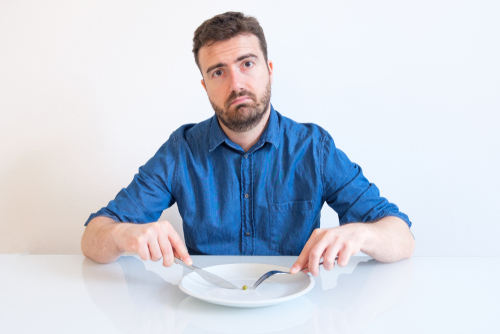 A top vegan campaigner has been drummed out of a senior position after he admitted eating eggs and salmon.

Tim Shieff has left the ethical clothing firm he helped found after a viscous backlash when he fell off the vegan wagon. Colleagues were furious and the former world champion free runner quit ETHCS clothing by mutual consent.

Shieff said he had abandoned his plant-based diet because he was “desperate” to improve his health. He had chosen to subject himself to a “35-day water fast,” during which time he only drank distilled water.

When the diet ended, Shieff felt the need to solemnly inform the vegan community that he ate two raw eggs and then tucked in to some salmon.

After eating the eggs, Shieff said: “It sent me questioning everything. A few days later I bought some wild salmon and tried that.”

His decision to relax his extreme diet was met with online fury from his colleagues at ETHCS, the clothing company he founded in 2016.

The company—so-called because it deliberately misspells the word “ETHICS” to make the point there’s no “i” in the ethics—apologized to its customers and said it was “hurt and let down” by his actions.

A spokesman for the company said: “For a long time Tim had been an inspirational example for veganism, as well as a good friend who has inspired us all, but this lifestyle change was something none of us could get on board with. “We have all been proud vegans for many years, and promoting the vegan message and ethical lifestyle choices was very important to us all. Considering ETHCS was founded on these same principles, we all agreed it would be best if Tim stepped away from the company. And in time Tim agreed too.”

Shieff, who had long been a proponent of unproven and potentially dangerous dieting, also claims to have drunk his own urine every day for the past two years. He said his departure from ETHCS was a “mutual decision.”