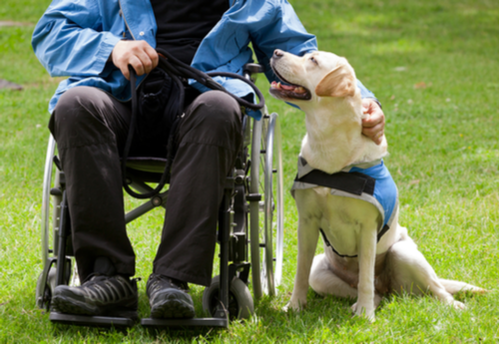 TV presenter Piers Morgan clashed on air with an animal rights campaigner who said guide dogs should be asked if they wanted the job. Wendy Turner Webster left Morgan visibly stunned when she said dogs may not want to be guide dogs at all and should be consulted.

The Good Morning Britain presenter could not hold back his rage when she went on to say she felt that there were also “welfare” issues surrounding the use of guide dogs.

She claimed a quarter of them do not become guide dogs and are sent into a rehoming system. She also claimed retired guide dogs are left with nowhere to go.

When a dumbfounded Morgan gathered his thoughts be began to pick apart her argument.

He asked: “Have you tried to train your dog?”

Turner Webster said she had, but only to sit as it is “for her safety.”

Turner Webster looked flustered and said she is responsible with her animals.

Morgan was shocked at her reply and added: “So because you’re responsible, it’s fine to not get consent?”

She told him he was “mixing up the issue” to which he replied: “You said it’s about consent? You decided, you, Wendy, know better about the animal. Because you’re a saintly figure, when it comes to your animal ownership, we should all relax?”

Piers Morgan is an English tabloid journalist and television presenter. He has previously clashed with vegans and animal rights campaigners on live TV and accused them of hypocrisy.