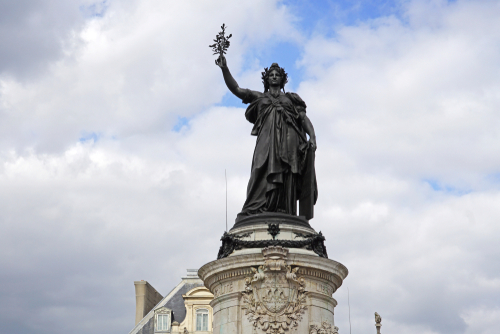 ANIMAL rights extremists were arrested after they threw fake blood on an iconic Paris monument. Police moved in when the statue of Marianne, the symbol of the French Republic, in Paris’ Place De la Republique, was defaced.

The organizers of the protests, an extreme activist group called L214, were calling for all abattoirs in France to be closed. The activists took part in what organizers called the “Red March” also demanded no animals be killed for human consumption.

As many as 4,000 took part in the demo but onlookers said they were offensive and insensitive after they hurled the fake blood at the statue.

The activists also caused offence by describing raising animals for slaughter as a “holocaust” and “genocide.”

Butchers across France have faced a concerted campaign of harassment at the hands of animal rights activists and have demanded the government do more to protect an industry central to the French culture and way of life.

In recent months, a court in Lille jailed two vegan activists for a string of attacks on shops, butchers, and restaurants.

French prosecutors have also demanded a suspended prison sentence for two activists who assaulted an organic butcher and poured fake blood over him and his produce.