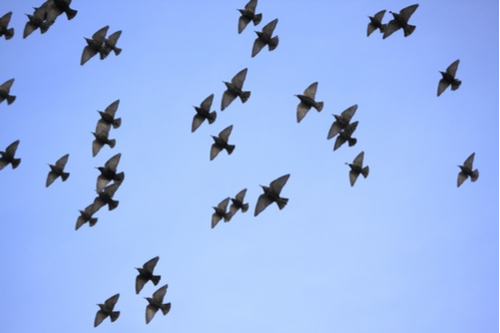 PLANS to release falcons in Rome to stop thousands of starlings defecating on the city have been labelled “barbaric” by animal rights activists.

Desperate officials want falcons to scare off the songbirds, which descend on the city in their thousands at dusk. But activists say officials are breaking local laws by releasing the birds of prey over the city.

Starlings pass through the city in late autumn as they migrate to warmer climes for winter, soiling its cobblestones and river banks with sticky guano and bothering residents and tourists, who have to use umbrellas to avoid the droppings.

The city called in a team of falconers when part of the road that runs along the Tiber River was closed because the birds had left so much excrement.

The job of the falcons is to scare the starlings away from their nesting spots, such as trees alongside the streets.

The Rome department in charge of environmental sustainability said the measure constitutes a “cruelty-free, ecological and natural solution” to the starling problem. But activists condemned the initiative as “barbaric.”

Rinaldo Sidoli from Animalisti Italiani said: “The environmental sustainability council says that using hawks to fight starlings is ‘cruelty-free, ecological and natural’ – these are shameful words that justify what is a cruel and anachronistic method.

This deterrent violates a municipal rule which prohibits the release into the environment of birds, except those treated by authorized wild animal recovery centers.”

Previous city authorities experimented with playing recordings of starling distress calls in an attempt to get the birds.

The arrival of the falcons will add to what Romans have started to describe as the city’s “zoo.”

Despite being around 30km from the coast, the seagull population has grown in recent years as the birds scavenge for food waste in the historical center, while wild boars have also been spotted rummaging through piles of rubbish in areas beyond.