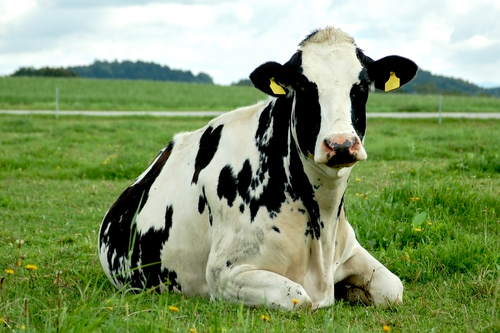 An art installation in which cows sit down and eat hay has been labelled cruel by animal rights activists.

Despite cows showing no sign of distress as they happily munch away, the artwork in Kosovo was targeted by at least twenty demonstrators.

The protest by the United for Animals group appeared to cause more distress to the animals than the installation itself. And the farmer who owns the cows said his animals were being treated better by the gallery than he can care for them on his farm.

The cow installation at Kosovo’s National Gallery is called “Woven Soil” and according to its creator, Sislej Xhafa, who is also a vegetarian, conveys the idea of “flying without going anywhere.” Visitors see eight cows in a cow shed, as they would on a farm.

The Kosovo National Gallery director Arta Agani said that that animal welfare issues were taken seriously and the cows are well cared for. And the owner of the cows, Arben Avdiu, said that his animals were well treated by the gallery.

He said: “Their condition is very good, they have everything they need, they are taken care of all day long. I don’t even look after them during nighttime at home, but here they have 24-hour care.”

But Elza Ramadani, an activist from the Foundation for Animal Rights group, refused to accept the animals were happy. She claimed: “This place here is not a place where they can graze and live how they should.”

0 comments on “Pull the Udder One”