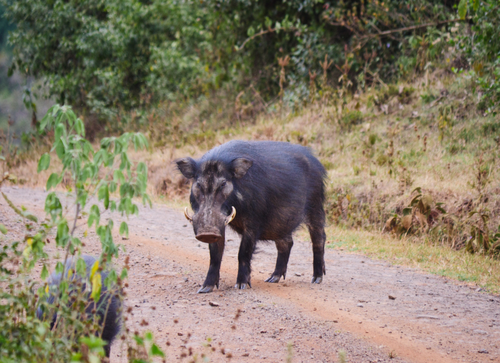 Herds of “super boar” rampaging through one of Britain’s ancient forests have bitten off part of a man’s finger, ravaged a graveyard and are defying attempts by marksmen to control their growth.

But animal rights activists have said attempts to halt the mayhem is cruel to the animal and they should be left to roam free.

Wild boar numbers in the Forest of Dean have risen from about 100 in 2008 to 1,635 and a cull is the latest in a series of attempts to cut the population.

The animals are now appearing across the south of England and Wales.

The National Trust has defended its plans to cull a herd, which “invaded” the renowned beauty spot known as the gardens at Stourhead in Wiltshire. Visitors complained of being “confronted and intimidated” by the snorting animals.

Christine Middlemiss, the chief veterinary officer, warned of the risk to Britain of African swine fever carried by boar. The virus, which has led to the deaths of hundreds of thousands of pigs in Europe, has been discovered in wild boar in Belgium.

But activists condemned the National Trust’s plans as “misguided and immoral.”

Anti-cull saboteurs in the Forest of Dean, which has Britain’s largest wild boar population, promised to continue thwarting the marksmen.

Drew Pattern, of the Forest of Dean Wild Boar Cull Saboteurs, claimed the animals move out of the forest to escape the Forestry Commission’s four sharpshooters. Members of the saboteurs’ group remove bait from near the shooting towers as part of their efforts to disrupt the cull, which cannot occur when members of the public are present.

Mr. Pattern, a marketing consultant, said: “There are 37,000 acres in the Forest of Dean and there is plenty of space for the boars. The boars are a great attraction for tourists but the public has to be taught not to get too close. If they are treated with respect they will leave you alone, and they are wonderful to watch.”

But Clive Lilley, 53, has first-hand experience of the risks posed by the boar in the forest in Gloucestershire after one burst out of the undergrowth as he walked his Labrador and ripped off the top of his right forefinger.

And Yorkley Star Cricket Club, one of the oldest in the country, has had its pitch on the edge of the forest repeatedly ripped up by the animals, while 12 boar turned the playing fields at Parkhead primary school, in the town of Lydney, into a mud bath.

In Cinderford, the Rev Mike Barnsley, of St John’s Church, said that damage caused to the graveyard by the animals had caused “upset and distress.”

The boar are also involved in dozens of traffic accidents a year.

Native wild boars were hunted to extinction in England in the 17th Century but 13 years ago about 60 farmed animals were illegally dumped in the Forest of Dean. As the population grew, the Forestry Commission initially intended to limit it to 90.

There have been repeated culls and 477 were shot in 2017 but it has failed to slow the growth.

Doctor Zoe Davies, chief executive of the National Pig Association, said it was misleading to describe the herds as wild boar and that they should be referred to as feral pigs.

She added that they had been either released by animal rights activists or had escaped from poorly secured farms. Many have been crossbred with commercial breeds such as Tamworths, producing a “superbreed” of fertile boar which were “more robust” and could produce five or six young, known as humbugs, per litter.

Doctor Davies said: “We are not saying that they should be exterminated but we need better measures to control them. “People do not understand how clever they are and how dangerous they can be.”

In September, Belgian authorities confirmed an outbreak of African swine fever and culled 5,000 pigs within a 240-square mile “biosecurity” area covering a forest near the border with France and Luxembourg.

The virus, which is highly contagious, has been found in 124 wild boars there.

Wild boar can stand up to 2ft 6in at the shoulder and typically weigh between 9 stone and 15 stone, although males of more than 30 stone have been reported.

Boars have poor eyesight but an extremely strong sense of smell, so they rely on their nose to find food and to detect danger.