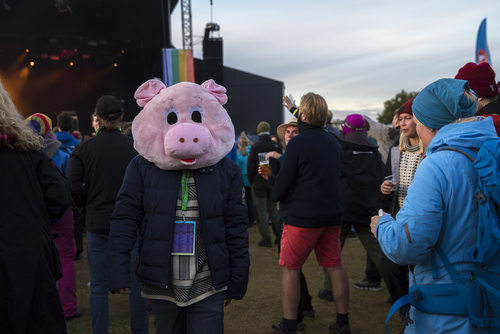 ACTIVISTS who attacked organizers of a lamb and pig race were left blushing when they were told animals were not involved.

They had called for the race – which was in aid of a cancer charity – to be scrapped on animal cruelty grounds. But the campaigners refused to see the funny side after being told the race was for people dressed as sheep and pigs – and not animals.

Owners of the The Swan Inn at Stalbridge, Dorset, UK, had advertised the fun event as part of its Ale & Gin Festival.

Campaigner Samantha Francis from the Lambentations protest group had attracted almost 15,000 online signatures before she realized her gaffe. The group even claimed the pub was set to let children ride piglets.

The petition on mypetitionsite.com, which has since been removed, said: “On 30th June The Swan Inn, Stalbridge plan to hold piglet and lamb racing as part of their Ale & Gin Festival.

“Not only that but they have said that children will be allowed to ride the piglets. As if that wasn’t enough there will also be a BBQ where the animals will be able to smell the cooking flesh of their fellow creatures.”

However, Andy Crook, the manager of The Swan, said that the plan was to dress four men and woman up and race them against each other.

Mr Crook said the pub was organizing the race for a family-friendly beer festival raising money for Weldmar Hospice and Macmillan Cancer Trust.

He said that the people signing the petition had been “misinformed.” He said, “Trying to keep this a fun day has been ruined by some bizarre comments – i.e. children riding live pigs – let me tell you now this would never happen in this establishment.”

Embarrassed Ms Francis said she was pleased the pub was not racing lambs or pigs but that the advertising was unclear.