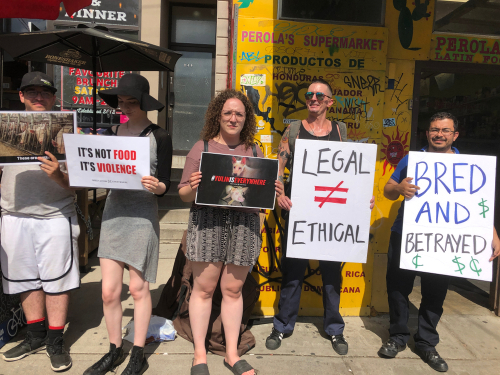 A restaurant boss accused activists of trying to put people out of work when they protested outside his eatery. Michael French, the general manager of the newly opened Texas Steakhouse in Leicester, UK, hit out after protestors tried to stop diners going inside.

They tried to engage customers in conversation about the meat trade and wrote animals rights slogans on the pavement right in front of the restaurant.

One, with an arrow pointing to the restaurant, read: “Dismembered rotting cow corpses.”

Mr French said: “We respect people’s right to choose, so if people don’t want to eat meat they can go somewhere that serves vegan food.

“We’re trying to build a business here. Would they rather see us go out of business?”

Isabella Rodziewicz, of Leicester Animal Rights, said: “We just wanted to speak to people about the exploitation of animals and this is a steakhouse.

“Meat consumption is plummeting and people have been grateful for the information we’ve been offering them today.”