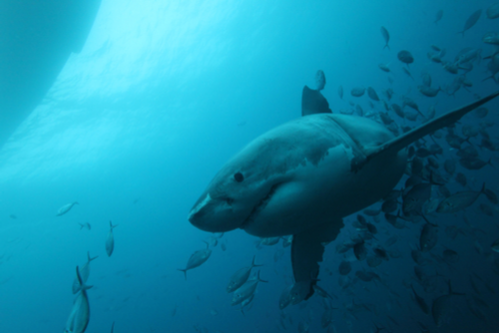 A fisherman who hauled in a monster great white shark—which had been snared in a net to protect swimmers—has received death threats from animal rights activists.

One post said he “needed a bullet” even though the man was only retrieving the dead 4.6-meter-long shark from nets at Maroubra Beach in Sydney, Australia.

It is one of Sydney’s most popular beaches and used by thousands of swimmers who are protected by the government-run shark nets.

The fisherman from the NSW south coast—who goes by the online name pf Trapman Bermagui—is thought to have hauled in one of the biggest sharks found in Australian waters.

He posted on Facebook:  “A 4.6m Great White Shark was caught in the beach shark net. The tail alone was 2m tall, with the pectoral fins of over 1m. Shark is pushing over a ton in weight…one of Sydney’s most popular surf beaches.”

He also posted several pictures of the shark, stressing he was not the one who caught it.

“Just a heads up for those who are hurling abuse at me on my last post, I actually live 500km away from Sydney and did not catch the shark,” he wrote.

“The shark nets off Sydney are a state government run project. I do know the guys who do this job and they work hard to keep our beaches safe – whether you agree with shark net protection or not, these guys are not the ones to abuse.”

But one online animal rights campaigner attacked him saying “that fisherman needs a bullet.”

But others defended the practice of using shark nets which have been proven to save swimmers’ lives in the shark-infested waters off Australia.

In a later post the government employee, who identified himself as “Trapman Bermagui” online defended the shark catchers from the abuse they had been receiving—telling animal activists to direct their anger at politicians rather those who were doing their job.

The social media storm surrounding the post came as Queensland master fisherman John Reid called for a shark cull after a spate of recent attacks along Australia’s coastline.

His calls were echoed by Queensland-based federal MP and former minister Keith Pitt, who said the state government has been “warned over and over again” about the large numbers of sharks.

Animal rights activists, including the Australian Marine Conservation Society, have been fighting the practice of shark culling across Australia.

Dr. Barbara Wueringer from Sharks and Rays Australia has warned swimmers to remain vigilant as the summer season approaches.

She said: “Something must have brought these animals in. Sharks are really far-roaming predators so you will find them anywhere in the ocean but there must be some reason why these animals are biting people in that area.”

The institute recorded 42 fatalities nationally within that time.

Also in NSW, Ballina recorded six attacks and one fatality. Sydney Harbour was third on the list with five attacks over the two decades and famous Bondi Beach came sixth with three shark attacks.