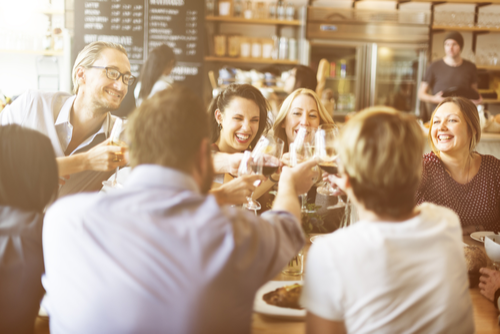 CHANTING animal rights activists who invaded a steak restaurant got more than they bargained for when revelers humiliated them.

They were driven out of the eatery by a rowdy bachelor party which chanted back at them and then applauded as they abandoned their demo.

The incident happened at a Touro Steakhouse in Brighton, UK when a group of Direct Action Everywhere activists stormed the restaurant and played the sound of cows being slaughtered and called for an “end to animal suffering.”

Activists attempted to give a speech about the benefits of veganism but were shouted down by the stag party, which included a £250 Oompa Loompa impersonator.

The comical orange dwarf figure and the revelers started chanting back “stand up if you love meat” and fellow diners to joined in.

Dan Holmes, 30, who was part of the stag party, said activists were shouting for about 10 minutes before his group lost patience and started singing back.

He said: “We felt they had said what they wanted to say and now it was time for them to go away and let people eat. We came up with some fun chants and the whole restaurant stood up when we sang ‘Stand up if you love meat.’”

“A protest is fine, but they overstayed their welcome and were becoming annoying. If they had just had signs then that’s one thing, but playing sounds of animals being killed was going over the top.”

Madsu Sudan Galtam, manager at Touro, a Brazilian-themed restaurant, said: “They didn’t do anything aggressive but it was a bit annoying because it disrupted everyone.”

Several videos have since emerged from the incident, with some filmed by the activists and others by bystanders. It triggered a national debate in the UK and outspoken TV host Piers Morgan slammed the activists and sided with the party.

He later twitted: “Stand up if you love red meat! Millions of insects are murdered during the process of making wheat. Vegans don’t care about insects. I do.”

Direct Action Everywhere have protested at a number of restaurants serving meat as well as supermarkets.

The group was originally set up in San Francisco in 2013. Its mission is to achieve “total animal liberation” and the creation of a law requiring “species equality.”

Associated groups then spread throughout the US, protesting against conditions at farms used by Whole Foods and organizing sit-ins at restaurants against animal violence.

By December 2014 the organization had spread across the globe, with groups established in 90 cities in 20 countries, and in the present day it has organized protests in 217 cities in 43 countries.

DxE pledge to take non-violent direct action but its disruptive demonstrations have been branded bullying.

0 comments on “Stand Up If You Love Meat”