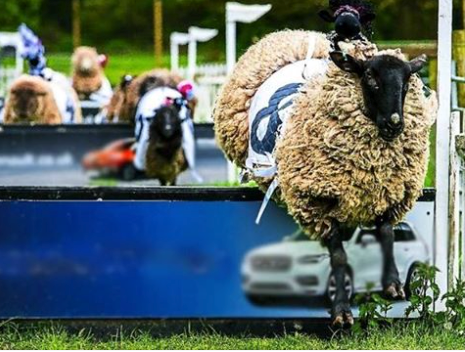 The grand national of sheep racing which was banned after activists said it was cruel is making a comeback.

Government vets have ruled it is not cruel after all and the race – dubbed the Lamb stakes – is back on.

It had been held in Shropshire, UK, every year since 1991 until activists campaigned to end it.

More than 52,000 people signed a petition urging Hoo Farm Animal Kingdom near Telford to call off the event in which eight sheep leap over 2ft fences with teddy bear jockeys on their back.

As a result the Easter race was called off but organisers announced its return in time for the May bank holiday weekend race.

Hoo Farm announced on its Facebook page: “After a review of the racing and the entire farm by two vets from the Animal and Plant Health agency on the 19th April, they were ‘satisfied that the welfare of the sheep was not compromised by being involved in the racing.’

“We look forward to seeing you all this weekend for the start of the Sheep Racing season.”

In a response, animal activists group Lambentations, which organised the petition, said: “All our hard work undone by the APHA.”

0 comments on “And They’re Off! Sheep Grand National Makes Comeback”