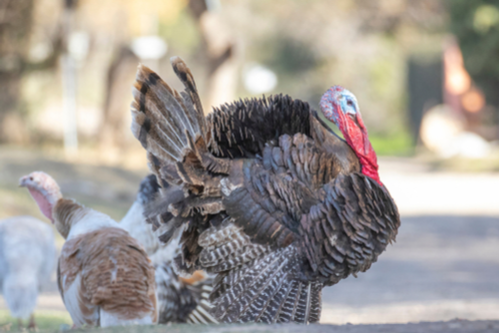 TOP chef Richard Corrigan has told vegans they have no right to preach to meat eaters.

The Irish star who is the owner of Bentley’s and Corrigan’s in London’s Mayfair spoke up after a turkey farmer received death threats.

Devon farmer Matt Carter hit the headlines in the UK after he ran a promotion in which customers could name and look after a Christmas turkey before it is slaughtered.

Activists daubed threats on his shop and Corrigan responded by penning a letter to The Times newspaper in which he revealed he had also received threats and said it was time vegans backed off.

Here is the letter in full in which his claims vegans are ill-informed, use intimidation and are not interested in dialogue.

He wrote: “It was disturbing to read that Matt Carter, a farmer in Devon, received death threats and had “Murder! Go Vegan” sprayed on the doors of his shop.

“As a restaurateur I’ve had similar kinds of intimidation after putting veal on a menu.

“I understand that it may upset people but that is no excuse for threats of violence and attempting to destroy someone’s livelihood.

“Veganism is a lifestyle choice, and one I certainly don’t condemn, but vegans have no right to preach to people who want to eat meat.

“Those who don’t think it’s acceptable to kill an animal in order to eat it will never agree with those who do but they should at least acknowledge the care that farmers take in the rearing of their animals.

“I am a farmer’s son and have a strong relationship with the land. I think it was a wonderful idea inviting customers in to choose a turkey.

“We all know that there is a cost to intensive farming  to birds, insects, bees, you name it  and increasingly farmers are moving away from it.

“Lots of people are trying to make a living in the countryside, like Mr Carter, by ethically farming animals to sell to a market that wants to eat meat.

“Frankly, I would rather consider being a vegetarian than eat meat produced by American-style factory farms.

“For their part, vegans need to pay more attention to where their own food comes from and how it’s produced.

“The cost of producing grain crops in many parts of the world is deforestation and the destruction of local communities.

“It doesn’t seem to occur to many vegans that what they’re eating may have been produced with ethical standards that are much lower than those of a small farm in Britain.

“We have to find some common ground between opposing sides.

“It’s not a one-sided argument: there is a discussion taking place all over the world regarding animals, meat-eating, veganism.

“Out of it will come much better thinking, in terms of ethics, ecology and the environment.

“But it does require discussion and when you try to destroy someone’s livelihood that is not discussion.