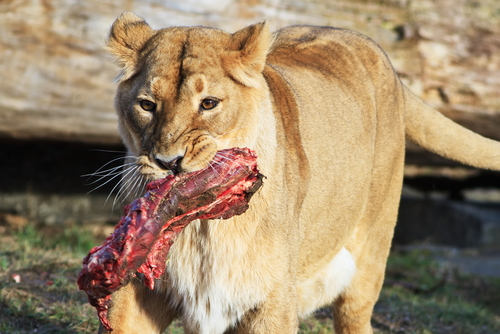 A ZOO has hit back at claims of animal cruelty after letting visitors play tug o’ war with a lion. The “human vs beast” challenge sees groups of four pay £15 to wrestle meat attached to a rope from a big cat.

A petition has been launched to ban it at Dartmoor Zoo in Devon, UK, accusing it of “putting profits before the animals’ welfare.”

But owner Benjamin Mee, played by Matt Damon in 2011 film We Bought a Zoo, said it was a “fuss about nothing.”

He dismissed fears the beasts could lose teeth, and said the money will be spent on renovations.

But since its launch, a petition campaigning against the attraction has gathered nearly 2,000 signatures, with the petition’s author Sue Dally claiming the zoo “is acting more like a circus”.

The petition adds the zoo appears to be “putting profits before the animals’ welfare.”

But Mr Mee, who bought the zoo when it was on the brink of financial collapse in 2006 with many of the animals’ lives at risk, said the tug-of-war activity is “100 per cent the right thing to be doing.”

Mr Mee, who started life as a bricklayer and decorator, said not only do the animals “love” the experience, it is an “enriching exercise” that mimics life in the wild.

He said it’s also raising much-needed funds for the zoo, which is a charity, to rebuild the 30-year-old lion house which needs upgrading.

He added: “People are making a fuss about nothing. I think this is 100 per cent the right thing to be doing; the lion loves it. I will not be persuaded not to do the activity unless someone provides me with evidence against it.”

“I understand some of the criticism is around it being a form of public entertainment, and we are being paid to entertain crowds, but it is engagement at its purest form. “

“People get a real appreciation of the power of the animal, which you just can’t get from a documentary. A third of African lions have died in the wild in the last five years, from 30,000 to 20,000. That doesn’t sound huge, but it’s not a number to be complacent about.”

“Yes we make money from it, but we are a charity and the lion house is 30 years old and needs upgrading. We are coming out of the winter season into the summer circus now to start paying for renovations, and this is going to help.”