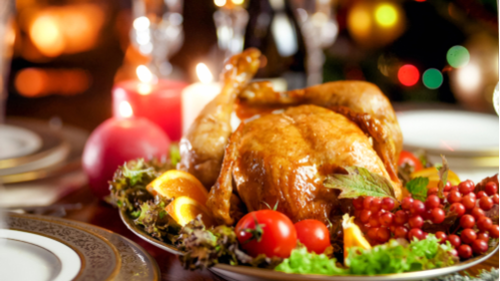 Militant vegans threatened to kill workers at a farm that offered customers the chance to pick their own Christmas turkey.

Graffiti reading “Murder! Go Vegan” was daubed on the front of Greendale Farm’s shop near Exeter, UK, and bright blue paint was sprayed over pheasants hung outside.

Matt Carter, 35, the farmer, said that he had received death threats and the shop had been bombarded with threatening calls since his promotion offering customers the chance to name and look after their Christmas turkey before slaughter.

The attacks followed warnings about militant vegans targeting farmers and butchers before Christmas.

The post attracted more than 4,000 comments, mostly from activists claiming to be from the “Vegan Mafia.”

But many rallied to his defense and thanked him for giving them the opportunity to educate their children about the circle of life.

Mr. Carter, 35, has offered shoppers the chance to select a Christmas turkey from his flock.

They name, feed and look after it for two months until it is slaughtered, stuffed and handed to them oven-ready.

Mr. Carter, whose family has farmed in Exeter for five generations, said: “I’m not going to remove the post or stop being a farmer because we’ve had a bit of opposition from vegan groups.

“If you are going to eat meat, I think our way is the best way of doing it – where you can see the animals and then go to the butchers and buy the meat.

“It was the bit about naming they really didn’t like. I guess that’s because it brings it home that it’s a real animal – but that’s the whole point. That’s why we treat them with respect.”

The National Farmers’ Union said: “Everyone has the right to choose what they eat. What’s not OK is for some animal rights activists to use social media to not only post mistruths and inaccuracies about the way food is made but also send particularly distressing messages and accusations. Farmers take the health and welfare of their animals very seriously.”

Dr Zoe Davies, chief executive of the National Pig Association, said there has been a “concerning increase” in the number of members being targeted by activists.

The Vegan Society said it “does not support any threats of violence, or abusive behavior or language” adding: “We encourage vegan activists to share their message peacefully and positively. It’s important to note that veganism is based on kindness and compassion.”