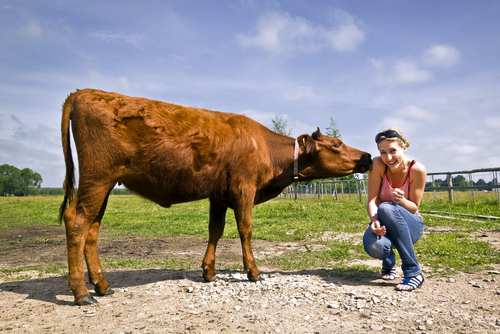 Vegan activists hold monthly vigils for cows arriving at a slaughterhouse and “apologize” to the animals. Members of a UK animal rights group stop trucks arriving at the abattoir so they can administer the “last rites” to the livestock.

Dina Aherne, the founder of Leicestershire Animal Save said the cows are made feel “at ease” and told they are not “just a number.”

She said: “We whisper things like, ‘We’re sorry’, ‘We see you’, ‘I love you’. Cows are sacred and have a living soul and conscience.”

The activists say they have an understanding with the Foyle Food Group, which runs the slaughterhouse in Melton Mowbray, Leicestershire, and they say allows them to stop trucks.

The vegan group which claim to be opposed to violence in any form hold up signs that scream “Your taste their death” during their protests. But some experts fear the activists may in fact be making the process more stressful for cattle.

Dr Toni Shepard, of campaign group Animal Equality UK, said of the protests, “for animals, it depends on how it’s done – loud noises may frighten them.”

But the 38-year-old former solicitor Ms. Aherne said she considered the protests to be “relaxing” for the animals, adding, “I am following my heart.”

Cows banned from It’s A Knockout

0 comments on “Vegans Whisper “I Love You” To Cows”