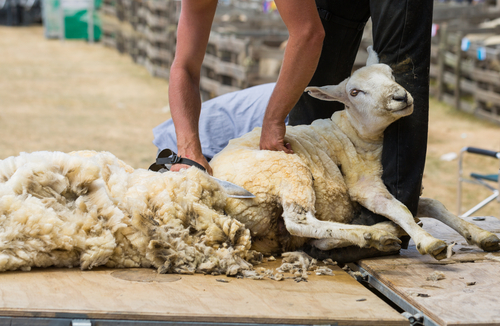 SHEEP farmers have accused the UK’s National Trust of causing damage to the environment by dressing its staff and volunteers in synthetic fleeces.

The National Sheep Association (NSA) says the garments worn by the trust’s 10,000 staff and 61,000 volunteers contribute to water pollution. Instead, it should show its support for farmers by switching to jackets made of natural wool, the association said.

The trust, which manages more than 600,000 acres of land and dozens of stately homes, said that it was “seeking material alternatives” to the garments amid rising concern over synthetics and their harm to the environment.

Critics say that synthetic fleeces and jackets shed hundreds of thousands of plastic microfibres every time they are washed, with the waste material often ending up in waterways and harming wildlife.

In a letter to the trust, the NSA argues that wool would be ideal for its staff and volunteers because it is “renewable, natural and reliable.”

The NSA went on the attack as it is fending off criticism from animal rights groups that claim that shearing sheep is cruel.

Fashion company Boohoo had said it would be removing all items containing wool from sale.

But days later, it did a U-turn following condemnation from the sheep industry and consumers.

Some sheep farmers even invited Boohoo representatives to visit and see how the animals are shorn but are not ill-treated.

NSA chief executive Phil Stocker said: “Some organizations make rash and uniformed decisions without properly observing the processes behind the British sheep industry. The vast majority of sheep in the UK are extensively grazed on grass that grows on little more than sunshine, rain and soil nutrients.”

“In doing so, grassland soils sequester carbon and help combat global warming. I would argue that wool is the most sustainable fibre on earth and that it is the ultimate in renewable technology.”

“It seems ironic that we call that garment the fleece, after a sheep fleece, yet most fleeces are manufactured from plastic materials and when washed, contribute to polluting our oceans and environment. Wool grows back naturally and by the winter, the sheep has a well insulated and protective weatherproof coat.”