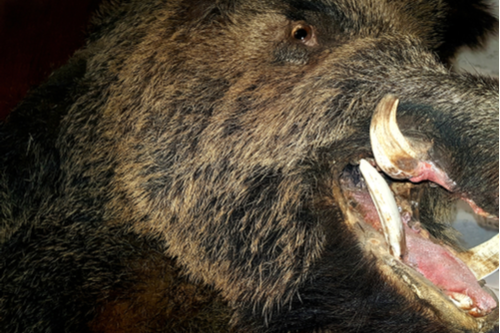 ANIMAL rights extremists were up in arms after marksmen were hired to protect a school from packs of wild boar.

Despite an increase in the number of the dangerous animals posing a threat to kids, activists claimed the shoot was cruel.

The Italian town of Mondaino near Rimini closed its school for a day and blocked the streets so hunters could move in.

Pupils were kept away from Saturday morning lessons after an upsurge in the number of boar freely roaming school grounds.

Town mayor Matteo Gnaccolini said: “We see them in the play-ground, around the school and on the playing fields.”

But the animal rights group Basta Delfinari, which protested against the school closure, claimed stray shots from hunters posed a greater threat to children.

Huge numbers of wild boar roaming free are a growing problem in Italy.

As farmland is abandoned the boar population has doubled in a decade to reach a million due in part to the introduction of a fast-breeding Romanian variety that has flourished in the warm climate.

The new breed has interbred with domestic pigs and can now produce two litters in a year.

But as the beats forage for food in towns and cities they are posing a growing threat.

In 2015, a pensioner in Sicily was killed by a herd of boar. And in Rome locals have been seen feeding boar making forays into the capital for food.

0 comments on “Wild Boar Not a Danger to Kids, Claim Activists”