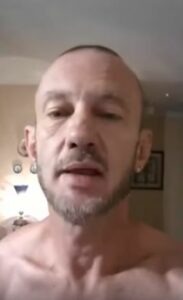 An animal rights fanatic has branded himself live on social media with a red hot iron.

The shocking video of activist Herman Le Roux is said to have upset thousands of social media users.

Le Roux was already on a 20-day hunger strike in Pretoria, South Africa, to raise money for animals when he pulled the sickening stunt.

He marked himself on the back with the number 269 using a red-hot iron rod he said to experience first-hand the pain felt by livestock during the branding process.

The number 269 represents a calf rescued from slaughter at an Israeli dairy farm bearing its heard number on its ear.

The rescue gave rise to the 269Life animal rights group.

Le Roux, 45, who is from Montana, said: “The calf has a number 269 and the number has since become a symbol of animal rights worldwide … I cannot speak with authority on something that I have not experienced myself. I (had) no experience how it feels to be branded‚ so the next time I educate somebody about getting branded‚ I can tell them it is this painful.”

He chose to go on a hunger strike to feel what hungry animals experienced, he said.

Le Roux is a recovering drug and alcohol addict who has suffered from bipolar disorder for over two decades.

Le Roux said that when he breaks his long fast at the end of December he would announce the details of how the funds would be distributed to animal shelters in Pretoria‚ Johannesburg, and KwaZulu-Natal.

He also said he has decided to become a vegan.