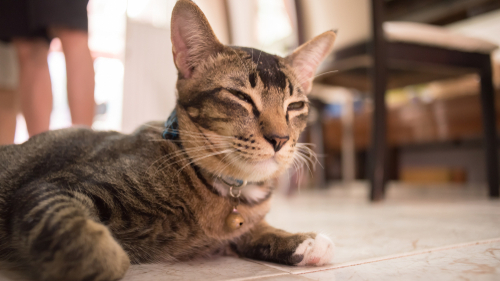 The hungry feline pounced on the defenseless duckling as it waddled up Downing Street with its family on its way to a park.

It is the latest gruesome act by the cat, which lives in the British government’s Foreign Office near the 10 Downing Street home of the UK Prime Minister. Shocked tourists watched as the cat made off with the dead duck between its jaws.

The black and white tomcat intercepted the unlucky duckling between the Downing Street nature reserve and St James’s Park, snatching it under the nose of its mother.

Last year the Foreign Office announced its mouser, who was adopted from Battersea Cats and Dogs Home, had caught 26 mice and a big rat in his first year. The department said the number was likely to be even higher, as the ferocious cat often “does not leave much behind.”

Larry the cat, his rival at No. 10, has only killed around five mice and is thought to be terrified of Palmerston.

Prime Minister Teresa May is clinging on to her premiership amid divisions overt Brexit and one wry commentator said: “It’s not the only dead duck around here.”

Protest is a Dead Duck