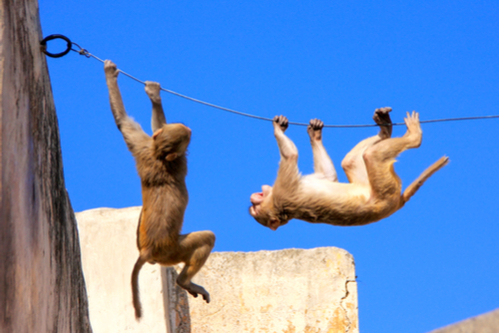 THOUSANDS of monkeys are causing mayhem in government buildings in India.

Troops of red-faced rhesus macaques have been breaking in through windows, destroying important documents and harassing government officials.

They have become such a menace across federal government properties in Delhi that parliamentary authorities have issued guidelines to MPs on the best way to handle a close encounter.

The monkeys are natives of the hilly forests of northern India but have been forced to adapt to living alongside humans, as cities have encroached on their natural habitats. They use Delhi’s tree-lined streets to swing between the buildings, damaging power lines in the process.

The problem is particularly bad at government offices ringing the presidential palace, as well as the parliament building and defense ministry, which are located not far from the city’s Central Ridge forest reserve.

Most government employees brush off their presence, but clashes are also common, with monkeys known to steal people’s phones, lunches and other items.

Ragini Sharma, a home ministry employee, said: “Very often they snatch food from people as they are walking, and sometimes they even tear files and documents after climbing in through the windows.”

Municipal bodies estimate there are up to 40,000 monkeys living in Delhi and while many solutions to avoid conflict with humans have been tried, none have worked.

The city authorities have previously used larger black-faced langur monkeys to scare away the macaques. But this was banned in 2014 after animal rights activists protested against keeping the langurs captive.