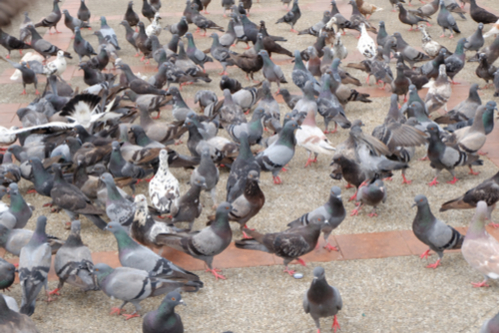 AUTHORITIES in a Spanish city are set to relocate thousands of pigeons because they keep defecating on people’s heads in picturesque plazas.

Some 5,000 urban pigeons in Cádiz will be moved 500 miles away to a province of Valencia.

Problem pigeons are usually shot or poisoned but officials said they wanted to be humane.

Madrid has recently outlined a plan for marksmen to cull its invasive populations of parakeets, and councils across Britain deploy hawks and electric shock systems. Cádiz environment chief Álvaro de la Fuente decided to act after thousands of complaints from restaurants about the number of rock doves in Cádiz’s center.

Mr De la Fuente’s department decided that the population of 8,000 was three to four times too many for the small city, and drew up a plan under which the birds are trapped, put through health checks and transported to their new home in Riba-Roja de Túria, 20 miles inland from the city of Valencia.

Antonio de María Ceballos, a tapas bar manager and president of the Cádiz hoteliers association, said that pigeons had “turned the city centre into their own private habitat, leaving excrement on the ground, building façades, restaurant and café terraces and their customers”.

He said: “It has become intolerable. We reckon we have lost 20 per cent of our business to pigeons.”