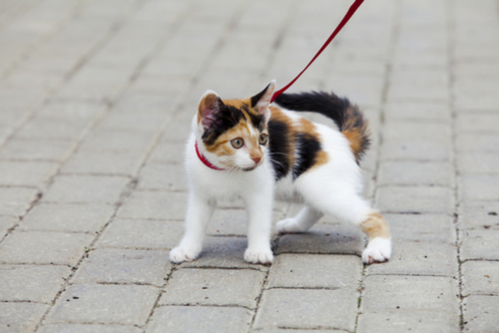 A scientist has claimed pet owners should start walking their cats on leads. Dr David Grimm, a deputy editor of Science magazine, has been walking his two cats on a leash for thirteen years and wants others to follow suit. He believes cats should be let outside for thirty to sixty minutes a day.

He said: “We just wanted our two kittens to experience more of the world than our cramped apartment in Baltimore. We need to start walking our cats. I’m not saying that you should put your cat on a leash like we did but it does keep them from running out into traffic.”

But the Royal Society for the Prevention of Cruelty to Animals says being tethered could frighten cats and has warned against the practice.

A spokesperson said: “Some cats may be frightened by the experience of being on a lead, so we would ask all owners to take this in to consideration. This is because a sense of control is very important to cats and being walked on a collar or harness prevents them from having control. It may be more difficult for them to be able to move away or hide from anything which might scare or worry them.”

“If an owner feels that putting their cat on a lead would not be stressful for their pet then they should introduce them to this experience in a slow, gradual and positive manner. If any signs of distress are seen such as the cat trying to pull away or get away then this should be stopped immediately.”

Despite the RSPCA advice, a movement called #catwalking has called on pet owners to begin taking moggies on walks, especially if they’re stuck indoors all day.

The group has more than 38,261 posts on Instagram that consist of pictures of owners taking their cats through cities, trains, buses and parks.

0 comments on “Taking Cats for a Stroll”