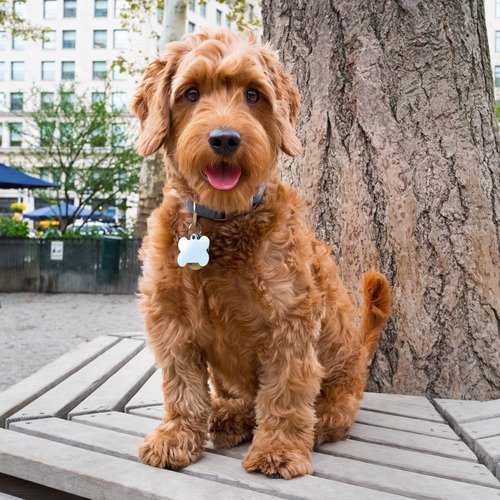 A man who turned his dog into a seven-foot giant using trick photography has become a social media star.

Christopher Cline posted pictures of himself being dwarfed by the dog and in one appears to be riding him like a horse.

Christopher from Buffalo in Minnesota, US, now earns his living by editing photographs of his Goldendoodle called Juji.

Using Photoshop he turns his dog into a larger than life beast and creates incredible adventures for himself and his pet.

Mr Cline’s social media accounts shows him and his dog fishing at sunset, relaxing in a library, standing under the rain, reading books and even snuggling up together.

Starting out as a hobby, Chris now has over 115,000 followers on Instagram.

With a help of his dog he has now begun an entirely new career as a pet photographer.

He said: “I started creating photos three years ago when I moved to Minnesota.

“It is brutally cold here during the winters and it is necessary to have something do to while you are stuck in the house for seven months.

“I began to toy around with an old camera my girlfriend had given me.

“At first, I just did random Photoshop and photography pieces, and then one day I created a photo of me riding on

Juji’s back just for fun and it went over really well.

“I would do one or two a week at first, and then I made the decision to make my Instagram and Facebook ‘all Juji, all the time.

“So began an entirely new career for me as a pet photographer. I hadn’t planned the adventure but I was willing to give it a go.”

Juji is now a local celebrity in Minnesota.

Christopher added: “Most of the people in my town know who Juji is.

“People love having their photo taken with him and sometimes they even want me in too.”

Christopher has now been doing pet photography for three years and says he “could not be happier”.

He said the idea of a project came from trying to imagine daily life with a seven-foot puppy.