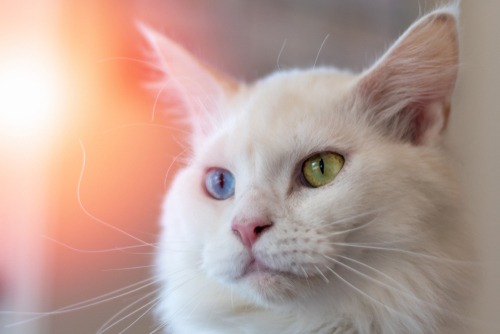 A stray cat named Moon has become a new best friend to a bullied schoolboy.

Seven-year-old Madden Humphreys was picked on at school because he has a cleft lip and different colored eyes – one blue and one green.

But in a remarkable coincidence Madden’s mum spotted a Facebook post about a homeless cat who also has a cleft lip and blue and green eyes.

She instinctively knew the homeless moggy could help her son rediscover his self-confidence.

When she brought them together it lifted Madden’s spirits and now he and the moggy are happy and inseparable.

She took action when she discovered the cat while browsing the internet at her home in Oklahoma.

Moon, who used to be called Valentine but was renamed Moon by Madden, had been taken in by Mending Spirits Animal Rescue in Mankato, Minnesota, 800 miles away.

Christina made contact and made the 12-hour drive from their home to claim the cat as their own.

Christina added: “We’re usually not spontaneous people, but we knew that we were meant to love this kitty.

“Funny how a pet can make you feel less alone. Madden has been beaming. I tell him all the time he is magical and I think Moon helps him realize how special he is.”

0 comments on “The Eyes Have It”