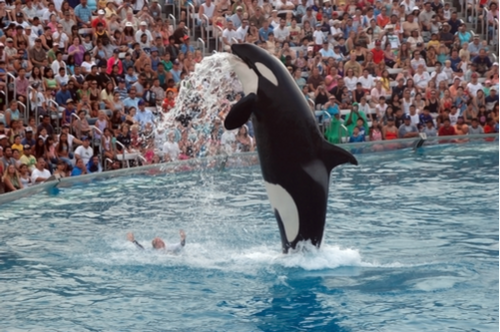 Tour giant Thomas Cook has announced it will stop selling tickets to SeaWorld.

It said it will no longer include package tours to the aquatic park in the United States which features killer whales. It has also scrapped trips to Loro Parque in Tenerife.

The end of the £1m relationship is a blow for the Florida-based animal attraction which has been fighting a PR war with activists for decades.

Its Shamu the Killer Whale show has been hugely popular over the years. But Thomas Cook said public concerns about the welfare of the captive killer whales is behind its decision.

Over the past 18 months the holiday company has led a crackdown on animal cruelty. It has run welfare audits at 49 animal attractions and removed 29 from its books as a result, including all that involved captive elephants.

Peter Fankhauser, chief executive of Thomas Cook, said he had listened to feedback from his customers which showed that 90 per cent said it was important that their holiday company takes animal welfare seriously.

He said: “We’re conscious of changing customer sentiment. We have engaged with animal welfare specialists in the past 18 months and taken account of the scientific evidence they have provided.”

The move comes following numerous campaigns by activists calling for wildlife attractions to be closed and animal to be left in their natural environment.