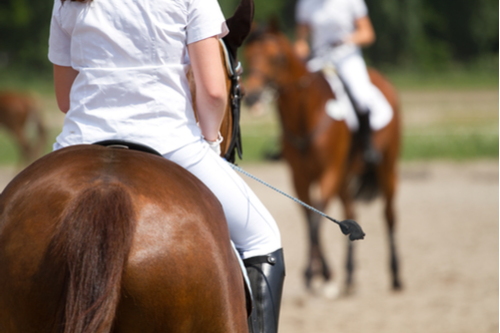 HORSE racing bosses are to ban whips in a bid to appease animal rights activists.

The experiment in South Africa is also an attempt to attract younger fans to the sport.

After the first “no-whip race” was held at Turffontein in Johannesburg, one of the country’s oldest tracks, the National Horseracing Authority (NHRA) announced that there would be more to come.

Arnold Hyde, the organization’s acting chief executive, said it recognized the growing concern about the use of whips, or crops, in racing and that a ban could draw a new following. “We want to attract people who love horses into the sport,” he said.

Whip use in racing has come under increasing pressure from animal rights groups and some spectators who worry that it could traumatize the mount.

International and national guidelines regulate the use of whips.

Modern equipment used in South Africa and Britain is cushioned and designed to create a sound rather than inflict pain.

Nevertheless, jockeys in Britain can be temporarily banned for excessive use during a race.

The Belgian jockey Christophe Soumillon was criticized on social media by spectators and animal rights groups including trainers and former jockeys  for heavy use of his whip during the Breeders’ Cup Classic at Churchill Downs in Kentucky, USA.

There had been similar controversies in South Africa.

Mr Hyde added: “It’s all over social media almost instantly. That can be a big negative for people wanting to be involved in the sport.”

The racing industry has been debating how to maintain its relevance and distance itself from perceptions that it is an older, elitist sport tied to gambling.

“Some argue that controversy over the use of the crop has become such a public perception problem that the sport needs to address it.”

The British Horseracing Authority said that it was monitoring the South African move with interest.