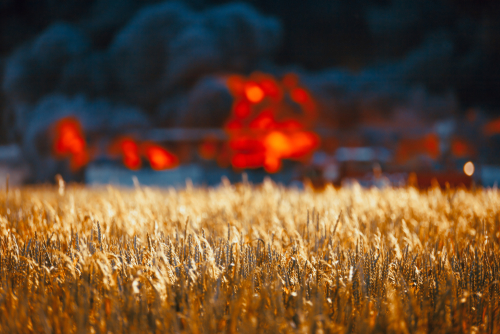 A farmer believes animal rights activists torched a giant shed on his property. Mike Borema said her told police he believes activists were behind setting fire to his property, the Minko North Dairy in Korunye, South Australia.

It is one of Australia’s biggest dairy farms and said the blaze destroyed the main shed, a tractor and ton of animal feed.

Neighbors said they heard several loud explosions coming from the shed just before the fire started, then saw a car speeding away from the scene moments later.

Police are treating the fire as suspicious and are investigating it as a potential arson.

Borema said: “It does lean towards animal activists but I’ll wait and see on the police investigation.”

The farm Minko North has been identified on the animal activist organization Aussie Farm’s so-called “attack map” which it is thought has inspired acts of sabotage on farms across the country.

He said people should be “able to go about their business without being unfairly targeted”.

A butcher in Brisbane blamed “angry vegan activists” for the graffiti and a broken window caused to his shop. And several activists were arrested in Melbourne after blocking busy roads as part of their increasingly angry protests.