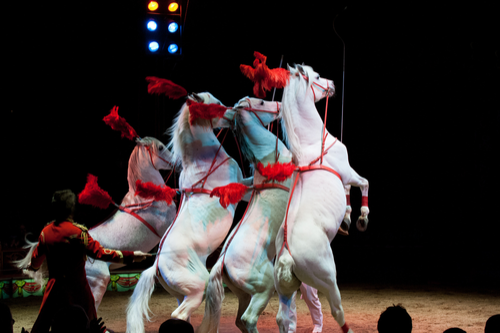 A CIRCUS featuring dancing horses and budgerigars has defied activists to make a comeback. The world-famous Zippos Circus has returned to London two years after it was badly disrupted by animal rights protesters.

Zippos Circus announced that it would be returning to the capital’s Hampstead Heath after breaking a 15-year run in 2017 following sustained hostility and abuse from activists the year before. The City of London authority confirmed the circus was returning by public demand.

The “Khadikov Riders” will perform The Courier of Saint Petersburg, in which “a rider straddles two cantering horses” and a single rider is “mounted astride a whole team of horses”.

Zippos has published an inspection report from a vet which has been approved by the City.

It says the show’s six horses are from mainland Europe and are kept in clean and well-maintained stables with fresh water and hay and enough space to lie down and sleep.

A spokesperson for the City of London Corporation said: “The organizers maintain the highest standards of animal welfare which is independently verified by veterinary surgeons and animal health officers.”

Animal rights campaigner Marianne Harris, who lives in near the Heath said: “From my perspective it gives children the wrong message – that animals are commodities and there for our entertainment, that they are under our control, and can be used to make money and entertainment. We should be putting forward a message of kindness, compassion and understanding.”